“If you give a boy a hammer, he will suddenly find that everything looks like a nail.”

In some ways, this is how Agile is being applied in the industry today. It doesn’t matter what problem you need to solve, hit that nail with a Hammer. You want to get better predictability? Hammer. Quicker time to market? Hammer. You want to improve employee morale? Hammer.

So here’s the thing about Hammers:

Hammers are simple tools. They have a simple premise. A simple operation. So simple, you’d think anyone could use one. “It should be intuitively obvious to anyone how to use a Hammer“, says the carpenter or the guy that invented it. Even the handyman at home looks at the Hammer, and nods knowingly.

But there are some people who just don’t understand the Hammer:

The Hammer is a wonderful tool. When applied properly at the appropriate time, it works wonders. But even if you apply it to the right problem, it won’t help you if you use it wrong. 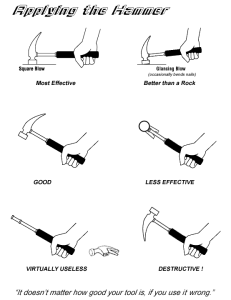 The right tool for the right job:

When you know how to use a Hammer, and you know how to hold it, and you have an appropriate nail to hit with it, the outcome is based on skill. If you are skilled, and things go well, you’ll hit the nail squarely on the head, and drive it straight and true into the wood. If you are a little lax, or you haven’t gotten a lot of practice with the hammer, you’ll get it mostly right. The hammer may hit the head at an angle or off-center a bit. The nail will still go in, but it may get a little bent along the way. Nothing you can’t straighten out with a little time. And in the end, your skill grows, and you hone your craft until you drive straight and true all the time.

The right tool in the wrong hands:

There are people who treat their Hammer as if it doesn’t really matter how they use it. They have a Hammer, and a nail staring at them, and start banging away at it. They may get the general idea, but they approach it wrong, pounding the nail with the side of the tool. Sure the nail might eventually go in, but it won’t go fast, you’ll have to pause often to straighten it out, and in the end, you’ll probably do some minor cosmetic damage to the area surrounding the nail.

Some people look at the Hammer and decide there is more to it than they need. They take it into the toolshed and fiddle with it a bit before putting it to use. Sometimes they remove a really important part, so that when they finish, what they have left couldn’t rightly be called a Hammer any longer. But it started as a Hammer, so when someone asks if they have a Hammer, they always answer in the affirmative. “Yes, we have a Hammer, and I gotta tell you, that thing isn’t near as useful as you said it would be.”

Finally, there are the folks who look at the Hammer and get the intent wrong. In their hands, the Hammer becomes a weapon of unimaginable destruction. By the time they finish the job, there isn’t a sane person around who would dare let them have another crack at using the Hammer.

Everything isn’t a Nail:

But let’s assume you understand the Hammer.  Sometimes you’re not dealing with a nail.  When that happens, a Hammer isn’t necessarily the right tool for the job.  It doesn’t really matter what your Hammer is.  Maybe it’s XP, maybe it’s Scrum or Kanban.  Maybe you  follow another Agile path.  Scrum may be your Hammer, but it’s not the only tool in the chest.  The Agile toolbox is vast.  It is to your advantage to understand the purpose of the tools at your disposal so you can apply the appropriate tool at the appropriate time.

Possibly the biggest mistake an organization can make in their Agile adoption is to assume that because you hear Hammers, you’ve achieved Agility.  Too many organizations miss the point of Agile.  They think that if you’re following the practices of the method, that you are succeeding.  They think that if you’ve been trained to “do” Scrum, that you are “being” Agile.  I’ve said it before, and I’ll say it again and again.  Scrum is a collection of practices that help you achieve Agility if you apply them for the right reasons.  Agility is more about the philosophy that led to a declaration of Values and Principles.  The practices associated with the various flavors of Agile each in their own way build upon the Values and Principles expressed in the Agile Manifesto.

Agile works because it leverages the forces that motivate and drive individuals.  Agile is about recognizing the reason behind the work you do.

Anyone can pound a nail.

Some can pound it well.

But pounding a nail is only a single step on the road to building to a much bigger goal.  Don’t lose sight of the bigger picture.  And don’t jeopardize the larger goal with shoddy workmanship.

One thought on “Give a Boy a Hammer…”